Washington (CNN)The incoming Trump administration has told allies it is moving ahead with plans to relocate the US Embassy in Israel from Tel Aviv to Jerusalem — even as those countries issue stark warnings of the potential impact and the Palestinians and Arab nations are escalating calls not to do it.

In Israel, where officials have lobbied countries for years to move their diplomatic missions to Jerusalem, which Israel claims as its capital, there is speculation a US announcement could be made as early as May 24 — “Jerusalem Day” in Israel, a celebratory national holiday. That date comes just days before a waiver signed by President Barack Obama blocking the move expires.

While some diplomats said there are signs President-elect Donald Trump may pull back from his campaign pledge, Arab and European allies have warned the incoming administration that the move could unleash further violence, undermine the peace process, damage US standing in the Middle East, and endanger American personnel.

“It’s very dangerous,” said a European diplomat. “Chances for the peace process are going very quickly — it’s now or never. Violence is always a concern and, at this point, it’s probably easy for Palestinians to demonstrate their frustration.”

Jerusalem is already something of a tinderbox, with the most recent violence coming Sunday afternoon, when a Palestinian drove a truck into a crowd of Israeli soldiers, killing four.

Palestinian President Mahmoud Abbas has written to Trump to say an embassy move would have a calamitous impact on the chances for peace. And he warned in a recent speech that “any statement or position that disrupts or changes the status of Jerusalem is a red line which we will not accept.”

Abbas has followed up with written pleas to the leaders of Russia, China, France, Germany, the United Kingdom, the Arab League and others asking them to stop Trump.

Secretary of State John Kerry issued his own warning, telling CBS last week that if the US moves its embassy to Jerusalem, “you’d have an explosion — an absolute explosion in the region, not just in the West Bank and perhaps even in Israeli itself, but throughout the region.” 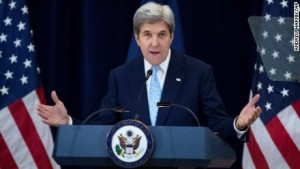 State Department officials, speaking anonymously so they can express themselves freely, said they fear the move will lead to security problems for US diplomatic missions and troops throughout the Middle East, create friction in US relationships with countries across the region, and cause even deeper rifts between Israelis and Palestinians.

The European diplomat said the US’s long-standing role as an honest broker is also at stake.

“If the US changes its policy so dramatically, then it’s very easy for others to dismiss their role and leadership in the peace process by saying, well, now the Americans are so closely aligned with Israel, it’s hard for us to take them as brokers,” the diplomat told CNN.

That diplomat’s country, like the US under previous administrations, wants to wait to move its embassy to Jerusalem, which Palestinians also claim as their capital, until final peace talks between Israelis and Palestinians.

“We’re always said we’re fine with moving our embassy to Jerusalem when there’s an agreement in place,” the diplomat said.

This diplomat echoed others from Europe in saying that the Trump transition team has been very clear in talks that its priority is helping Israel “in whatever terms Israel would like to be helped and if they prefer the embassy in Jerusalem, why not?”

US allies point out that if the embassy move takes place, it will matter where exactly it goes. West Jerusalem would be less problematic than if it’s placed in East Jerusalem, which Palestinians could see as an annexation by Israel.

“If it’s moved into East Jerusalem, the Palestinians would certainly view it as a provocative move,” said another European diplomat.

The Trump team has offered no specifics on when or where the embassy would move, but Trump has said he’d like it to happen soon.

In a speech to the pro-Israel lobby group American Israel Public Affairs Committee in March, Trump said he wanted to “move the American embassy to the eternal capital of the Jewish people, Jerusalem.” In a subsequent TV interview, he said the move would happen “fairly quickly.”

The Trump team didn’t respond to CNN’s request for comment.

US officials told CNN one option would be to simply switch signs on the embassy in Tel Aviv and the smaller US consulate in Jerusalem — but the embassy is so much larger, that would require some sort of immediate expansion of the consulate to accommodate the additional staff.

The US already owns part of a property in Western Jerusalem that could serve as a home to a future embassy there.

The Israeli Ambassador to the US, Ron Dermer, has said an embassy move would be “a strong message against the delegitimization of Israel and of Jerusalem as the Israeli capital.” Dermer, who has support on Capitol Hill, said that a move “would be a great step forward to peace.”

The 1995 Jerusalem Embassy Act calls on the US to recognize Jerusalem as Israel’s capital and relocate the embassy there. But the law allows for the move to be waived if the President deems it harmful to US national security interests.

Since it passed, every US president — Bill Clinton, George W. Bush and Barack Obama — has signed the waiver every six months, even though Bush and Clinton had promised to move the embassy during their presidential campaigns.

It is unclear whether the incoming administration or Congress could overturn that waiver before it expires on June 1. To pressure Trump to make good on his promise, a trio of Republican senators have introduced a bill that would strike language allowing presidents to use the waiver — and would halve the budget for embassy security worldwide until a move takes place.

“Jerusalem is the eternal capital of the Jewish state of Israel, and that’s where America’s embassy belongs,” said one of the sponsors, Florida Republican Senator Marco Rubio. “It’s time for Congress and the president-elect to eliminate the loophole that has allowed presidents in both parties to ignore U.S. law and delay our embassy’s rightful relocation to Jerusalem for over two decades.”

With the six-month extension signed by Obama expiring on June 1, Israeli sources have suggested the May 24 Israeli holiday Jerusalem Day as a possible date for relocating the embassy. That national holiday commemorates the reunification of Jerusalem and the establishment of Israeli control over the Old City following the June 1967 Six Day War and typically is marked by ceremonies and memorial services.

But the extension could give the incoming administration time to rethink the consequences of its decision and find a face-saving way to back out. Diplomats suggested once the administration is in office for a few months, the realities of chaos in the Middle East and the need not to alienate US Arab allies may cause a newly minted President Trump to sing a different tune.

“We’ve seen this promise (from US presidential candidates) in every election,” Lieberman noted during remarks at the Saban Forum. “It’s very important but we have other issues.”

A debate is taking place over the movement of the US Embassy in Israel from Tel-Aviv to Jerusalem – Israel’s capital.   In this hot debate, the President Donald Trump promised to make this long overdue move, as have all presidential candidates for several decades.  It is possible that most likely President Trump will implement such move.  From the other hand, President Trump has nominated David Friedman, who is most vocal in his own support for moving the U.S. Embassy, as U.S. Ambassador to Israel.

In past Israel had declared its independence in 1948 and shortly thereafter declared Jerusalem as its capital.  Palestinians have already warned that such action will end any possible peace talk and it will worsen the conflict that is a root cause of major Middle East crises.  So it is a very hot topic to see the outcome in the coming months and I hope the world will be in peace.  No, matter what we are all human and have the right to live in peace.  Sadly these sort of conflicts has destroyed the peace and ruined the life of millions.