French voters have gone to the polls to choose between the pro-European centrist Emmanuel Macron and far-Right candidate Marine Le Pen after a rollercoaster campaign in the country’s most unpredictable and high-stakes presidential election in decades.

Mr Macron has been far ahead of his rival in opinion polls since the pair beat off competition from nine other candidates and made it through the first round of voting two weeks ago in the ballot on which the survival of the European Union may depend.

But after the surprise Brexit result in Britain’s referendum last year and the arrival of Donald Trump in the White House, many were still convinced on Sunday that the French might deliver yet another shock result.
Voting began on Saturday in France’s overseas territories in the Indian Ocean and the Caribbean, while polling stations opened on the mainland on Sunday at 8 am local time, with the new resident of the Elysée expected to be announced at 8 pm. 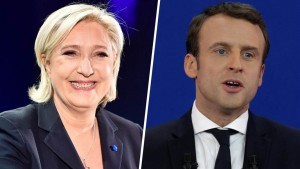 He or she will a week later take over from the Socialist President François Hollande, whose failure to stem mass unemployment and turn around the country’s ailing economy brought him record low popularity ratings.

The action-packed election campaign ended on a suitably dramatic note just before midnight on Friday, when Mr Macron’s team announced they had been hacked and their private emails and official documents dumped online.

This, the team said in a statement, was an attempt at “democratic destabilisation, like that seen during the last presidential campaign in the United States.”

The perpetrators of the leak remain unknown – although suspicion quickly fell on Russia – and it was unclear what if any effect the document dump might have on the large opinion poll lead of Mr Macron, 39, over Ms Le Pen, 48.

The pair offer radically different visions of the future of France.

France’s 47 million registered voters are being asked to choose between Mr Macron’s business-friendly, pro-European vision and Ms Le Pen’s protectionist, closed-borders view that resonates with workers left behind by globalisation.

She wants to give French nationals priority in jobs, housing, and welfare, slap extra taxes on foreign workers and imports, negotiate with the EU for return of “full sovereignty” for France, hold a referendum on “Frexit,” and possibly stop using the euro as the national currency.

Many political observers say that her victory, after the euro crisis and the Brexit referendum, would likely signify the beginning of the end for the EU.

The former economy minister’s victory would be interpreted as putting a possible stop to the wave of populism that sparked the Brexit referendum result and swept Mr Trump to power in the US.

The Socialist candidate and the scandal-scarred conservative François Fillon, whose parties have alternated in power in France for decades, were both ousted after the first round of voting.

The campaign was unusually bitter, with voters hurling eggs and flour, protesters clashing with police, and candidates insulting each other on national television in a reflection of the widespread public disaffection with politics.

For many, even within Ms Le Pen’s own Front National, the debate was a disaster for the candidate who has worked for years to bring her far-Right party, once a pariah for its racism and anti-Semitism, into the mainstream of French politics.

The two-and-a-half-hour slanging match saw Mr Macron branding his rival as an ill-informed and “hate-filled” liar who “fed off France’s misery” and would bring civil war to the country.

She in turn dubbed him an arrogant “smirking banker” who was soft on radical Islamists, lax in his attitude to terrorism, and bent on carving up France and handing it to the “big economic interests.”

But opinion polls showed afterwards that voters saw Ms Le Pen as focusing more on attacking her opponent than on coming up with solutions, and that her often contemptuous manner was far from presidential.

Even Pope Benedict had harsh words for the bickering French politicians, saying that they were “throwing stones at each other” instead of engaging in dialogue, according to Italian media.

Marine Le Pen  said, win or lose, “we changed everything”. He has altered French politics.

Three years ago,  Emmanuel Macron was largely unknown to the public. Today he is a step away from becoming France’s president. Emmanuel Macron’s remarkable rise from obscurity to favourite for the presidential election on May 7th carries symbolic value well beyond his homeland. His manifesto states the EU remains the best “guarantee of peace” on the Continent and he wants to bolster EU defence going forward. He wants to create a European Security Council to bring together military, diplomatic and intelligence leader of the member states. He has put forward a five year-plan that will see £42 billion (€50 billion) invested in areas such as job training, farming, transport, infrastructure and the healthcare.

If he defeats Marine Le Pen of the National Front (FN), as polls suggest he will, the country will have shown the rest of the world not only that it can favour youth over seniority, and optimism over fear, but that pro-European liberalism can still triumph over populism and nationalism.

One of her main goals is to curb immigration numbers and make it harder for businesses to hire foreigners.

Another hot topic on her programme is France’s membership within the European Union – Ms Le Pen has not outright said she would leave, but promised a referendum on the matter.

French voters will got to the polls for the second round of the election this Sunday May 7 to decide who will run the country.