Here’s what the public was led to believe about the Gun Trace Task Force, before the FBI arrested almost every member of the squad:

That in a city still reeling from the civil unrest that followed the 2015 death of Freddie Gray in police custody, the GTTF was a bright spot in a department under a dark cloud.

That while the homicide rate was on a historic rise, this elite, eight-officer team was getting guns off the streets at an astonishing rate.

That the GTTF’s leader, a former Marine and amateur MMA fighter named Sergeant Wayne Jenkins, was a hero who’d plunged into a violent crowd during the unrest to rescue injured officers.

But when the sun came up on 1 March 2017, the city awoke to a vastly different reality. 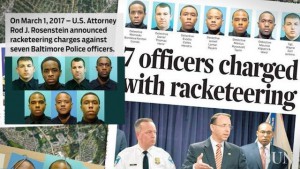 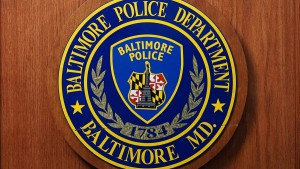 The leader of a rogue Baltimore police unit sobbed as he was sentenced to 25 years in prison in a corruption scandal prosecutors called “breathtaking”.

He was arrested along with almost every member of the unit in March 2017.

Jenkins must serve three years of supervised release after his custodial sentence.

He was convicted on multiple counts including racketeering, robbery and falsification of records.

Jenkins pleaded guilty in January and admitted taking part in at least 10 robberies of Baltimore citizens, planting drugs on innocent people and re-selling drugs he stole from suspects on an almost daily basis, including heroin, cocaine and prescription painkillers.

He walked into the court wearing a maroon prison uniform. It was his first public appearance since he was arrested along with six other officers last year.

Prosecutors urged the judge to sentence him to the maximum 30 years, adding that the unit’s corruption resulted in 1,700 criminal cases being thrown out.

“He perverted the criminal justice system.”

The GTTF was made up of eight officers, all but one of whom were indicted.

Detectives Daniel Hersl and Marcus Taylor went forward to trial and a jury found them guilty of robbery, extortion and fraud in February. Both men have requested new trials.

Although the indicted officers committed many robberies individually before joining the Gun Trace Task Force, prosecutors charge that they grew bolder and more prolific after Jenkins took over the unit in June 2016.

According to testimony from Ward and Hendrix, Jenkins played an outsized role in the schemes.

They said he prepared an arsenal of weapons and tools to begin carrying out burglaries.

The jury was shown axes, machetes and pry bars, as well as black masks that were found in Jenkins’ van after his arrest.

Prosecutors pointed to the fact that Jenkins fabricated evidence, like producing a bogus iPhone video of his officers cracking a drug dealer’s safe, when they had in fact already broken into it and stolen $200,000 in cash.

“It shows what a committed, sophisticated, devious person can do,” Mr Wise said. “What chance do we have when you have people like Jenkins and his co-defendants fabricating evidence?”

Media captionWatch the GTTF pretend to open a safe

The daughters of 86-year-old Elbert Davis also told the court about the 2010 car crash Jenkins caused while he was pursuing a man named Umar Burley.

In his plea deal, Jenkins admitted he planted heroin on Burley to try to justify the fatal collision.

Burley was sentenced to 15 years in prison, which he was serving until federal prosecutors uncovered the task force’s corruption and freed him.

“He is no more than a common criminal,” Davis’ daughter, Shirley, said of Jenkins.

“My dad would be alive today would it not be for his actions that day. We’ll never be the same again.”

The courtroom was also packed with Jenkins’ family and friends.

Although she did not address the court, in a letter to Judge Catherine Blake, Jenkins’ wife Kristy asked for leniency.

“This is not the man I know,” she wrote. “Wayne is truly sorry for his actions. He is very remorseful.”

Jenkins’ lawyer mentioned that he has been a target in prison, and has been assaulted at least once by another inmate who was targeting him for being a former police officer.

When Jenkins was allowed to speak, he turned first to face the Davis family and apologised repeatedly.

“I’m so sorry for what you’re going through. I wish I would never have stopped that vehicle,” he said.

He also apologised to Burley, who was not in the court, to his wife and to his father, and begged the judge for the opportunity to get out in time to be a grandfather.

“I’ve tarnished the badge,” he said through tears. “I deserve to be punished. I deserve to go to jail.”

Judge Blake ultimately decided to sentence him to 25 years, saying she was taking into consideration the fact that he pleaded guilty and co-operated to some extent with the prosecutors.

“This was a great abuse of the public trust,” said Judge Blake. “It strikes at the foundation of our entire criminal justice system.”

Jenkins winced as the handcuffs were placed on his wrists, and US Marshals led him out of a back door of the courtroom.

Detective Marcus Taylor on Thursday was sentenced to 18 years in prison on racketeering charges, including robbery and overtime fraud.

“Nobody still knows the truth about what’s going on in the city,” Taylor told the judge. “I still maintain my innocence. I will continue to fight to prove my innocence.”

Detectives Evodio Hendrix and Maurice Ward will be sentenced on Friday.

But the saga is far from over.

Last month, Mr De Sousa was indicted for failure to pay his taxes by the same prosecutors who brought the GTTF case.

He resigned and the top spot at the Baltimore Police Department remains vacant.

This story seems to be shocking to some people but this is the reality of what we have in the USA.  The fact that such elite police force is suppose to guard our community and make us feel safe but we see other wise is indeed disturbing.  What is shocking is that how this group would frame innocent people in order to continue their nasty operation.  So you can imagine how some people have lost their life and hope and frankly who is their to bring those lives back?!