Nato has rejected calls to enforce a no-fly zone, saying it could lead to direct conflict with Russia.

Nato member states such as Britain are already sending weapons to help Ukraine fight the Russian invasion. The EU says it will provide hundreds of millions of pounds to help arm Ukraine.

Russia has put its nuclear forces on “special alert” to counter what it calls Nato’s aggression.

Nato – the North Atlantic Treaty Organization – is a military alliance formed in 1949 by 12 countries, including the US, Canada, the UK and France.

Members agree to come to one another’s aid in the event of an armed attack against any one member state.

Its aim was originally to counter the threat of post-war Russian expansion in Europe.

In 1955 Soviet Russia responded to Nato by creating its own military alliance of eastern European communist countries, called the Warsaw Pact.

Following the collapse of the Soviet Union in 1991, a number of former Warsaw Pact countries switched sides and became Nato members. The alliance now has 30 members.

Why is Nato not intervening?

Ukraine is not a member of Nato, so the alliance is not obliged to come to its defence.

It is only a “partner” country, meaning there is an understanding it might join at some point in the future.

Nato countries have also made it plain that if their troops were to confront Russian forces in Ukraine, it could lead to an all-out conflict between Russia and the west.

US President Joe Biden has said: “That’s a world war when Americans and Russia start shooting at one another.”

Will Nato impose a no-fly zone?

One reason is that it wants to avoid conflict between Russian and its air forces. Another reason is that Nato planes, which are trying to protect themselves from attack, might need to fire anti-radiation missiles (ARMs) at radar installations on Russian territory.

Russia could use this as a reason to declare war on Nato countries.

How is the West helping Ukraine indirectly?

Some Nato nations have been sending weapons to Ukraine to help its defend itself against Russia.

Britain has sent 2,000 short-range anti-tank missiles and says it will send more weapons in the future.

Germany is sending 1,000 anti-tank weapons and 500 Stinger missiles. It has also dropped some restrictions on other countries sending German-made weapons to Ukraine. 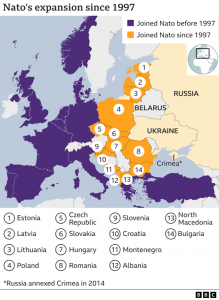 Nato has stepped up its military defences in eastern Europe

The EU has said it will be spending up to 450m euros (£376m) to fund the supply of weapons to Ukraine. It’s the first time in its history the EU has helped provide arms for a warzone.

One of Russia’s demands before the invasion was that Ukraine should never be allowed to join – something the alliance refused to agree to.

Russia fears Nato has been encroaching on its territory by taking on new members in eastern Europe and that admitting Ukraine would bring Nato forces into its backyard.

Nato says it is a purely defensive alliance. Its secretary-general, Jens Stoltenberg, condemned Russia’s invasion of Ukraine as a “brutal act of war”.

What presence does Nato have in Eastern Europe?

Nato already has troops stretching from the Baltic republics in the north to Romania in the south.

They were stationed there in 2014 after Russia’s annexation of Crimea and are designed to act as a “tripwire” in case of a Russian attack.

Russia’s invasion of Ukraine has heightened concerns among members in eastern Europe.

It has 100 fighter jets on high alert and has 120 ships, including three carrier groups, patrolling the seas from the far north to the eastern Mediterranean.

“We will defend every ally and every inch of Nato territory,” said Mr Stoltenberg.

President Putin of Russia has put the country’s nuclear forces onto “special alert” because of “aggressive statements” by the West.

The announcement does not mean Russia intends to use the weapons.

The US immediately condemned his decision calling it an “unacceptable escalation”.

The US has committed to sending more troops to Europe, but President Biden said they will not be fighting in Ukraine itself.

The extra troops will join the four multinational battlegroups Nato has in Estonia, Latvia, Lithuania and Poland, and its multinational brigade in Romania.

Ramin Sarajari Comment:  It is well known that the Kremlin’s ambition is to recreate a sphere of influence and get back to the old USSR map. And deny other countries the right to choose their own path.  But what could the west give to Russia to ease their mind and why they did not do anything about it?!  It seems that behind the curtain there are other hidden agenda.  Nevertheless, this is a disaster and its going to create more challenges in years down the road.  After all, the nuclear power Russia is playing the chess game very well and the west is in a situation that has no option but accepting losing some countries to the Russia ( Putin).