North Korea has been causing alarm in the Pacific region by stepping up its tests of long-range missiles.

It has fired more than 30 of them so far this year, including one that went directly over Japan.

What missiles has North Korea been testing?

North Korea has been testing a variety of ballistic missiles, cruise missiles and hypersonic missiles.

Hypersonic missiles fly at several times the speed of sound and at low altitude, to escape radar detection.

A recent missile tested over Japan is thought to have been an intermediate-range Hwasong-12, which has a range of 4,500km – far enough to hit the US island of Guam from North Korea.

“This is the longest-range missile it’s ever fired over Japan. It could be the precursor to it testing another nuclear warhead, which has been predicted for some time.”

North Korea has also been testing the Hwasong-14 ballistic missile.

This has a range of 8,000km – although some studies have suggested it could travel as far as 10,000km, making it capable of reaching New York.

It is the first of North Korea’s intercontinental ballistic missiles (ICBMs). 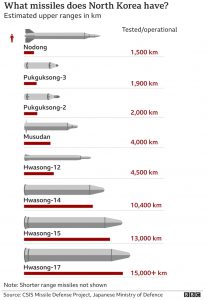 The Hwasong-15 missile is believed to have a range of 13,000km, putting all of the continental US in its sights.

In October 2020, North Korea unveiled the latest of its ballistic missiles – the Hwasong-17. It is believed to have a range of 15,000km or more.

It could possibly carry three or four warheads, rather than only one – making it harder for a nation to defend itself.

The unveiling of the new missiles appeared to be a message to the Biden administration of the North’s growing military prowess, say experts.

In March 2021, it carried out a launch of what it called a “new-type tactical guided projectile”, which it said was able to carry a payload of 2.5 tons – so capable in theory of carrying a nuclear warhead.

Analysts at the James Martin Center for Nonproliferation Studies told Reuters that it appeared to be “an improved variant” of a previously tested missile, the KN-23. 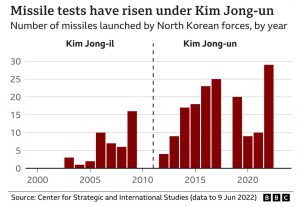 What nuclear weapons does North Korea have?

The last time North Korea tested a nuclear bomb was in 2017. The explosion at its Punggye-ri test site had a force, or “yield”, of between 100-370 kilotons.

A 100 kiloton bomb is six times more powerful than the one the US dropped on Hiroshima in 1945.

North Korea claimed this was its first thermonuclear device – the most powerful of all types of atomic weapon.

However, North Korea may now be aiming to test a smaller type of nuclear warhead with similar explosive force, according to Mr Byrne.

“It seems they are now testing a new capability – a miniaturised warhead that can be fitted onto a range of missiles, including short-range missiles” he says. 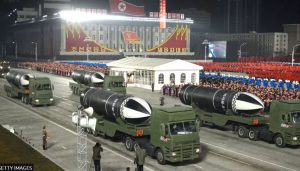 Where could nuclear testing take place?

Six underground tests have previously been carried out at Punggye-ri. However, in 2018 North Korea said it would shut the site down, because it had “verified” its nuclear capabilities.

Some of the tunnels into the site were subsequently blown up in the presence of foreign journalists. However, North Korea did not invite international experts to verify if it had been put beyond use.

Any future nuclear testing at the site would breach resolutions from the United Nations Security Council.

In 2018, North Korean leader Kim Jong-un made a promise to then-US president Donald Trump that North Korea would destroy all its nuclear material enrichment facilities.

However, the UN’s atomic agency says satellite images suggest that North Korea had restarted the reactor which makes its weapons-grade plutonium.

The International Atomic Energy Agency (IAEA) has also said that North Korea’s nuclear programme is going “full steam ahead,” with work on plutonium separation, uranium enrichment and other activities. 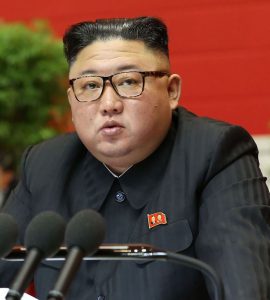 North Korea has been testing a variety of ballistic missiles, cruise missiles and hypersonic missiles. Hypersonic missiles fly at several times the speed of sound and at low altitude, to escape radar detection.  This is going to make the world more unsafe.  In particular countries like Japan and south Korea.  Imagine how one can live his/her life in daily basis when not knowing what will happen! 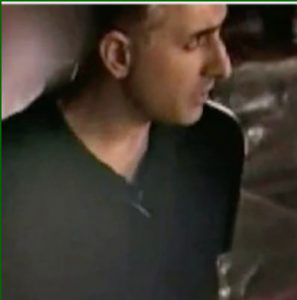