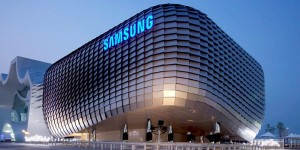 Samsung Electronics Co. just knocked Intel off its perch as the world’s biggest chipmaker by revenue, a spot the U.S. company has held since 1992. On Tuesday, Samsung reported 2017 chip sales of $69 billion, blowing past Intel’s $63 billion from last year.

The switch underlines how Samsung has transformed itself from a maker of cheap televisions into a pervasive supplier of key components in smartphones and other modern computing devices. It’s also a testament to the growth of memory chips, Samsung’s main market.

Intel, whose processors are the heart of about 90 percent of the world’s computers, didn’t have a bad year. Sales grew 6 percent. Success in computers is no longer enough, though. Memory chips, a market Intel only recently got back into, are now crucial parts of smartphones, which easily outsell PCs these days. Memory chips are also finding their way into a range of new devices such as cars.

One of the ironies of Samsung’s success in memory is that it’s a business Intel created in the 1960s. The U.S. company exited the market when competition from Japanese companies became too great in the early 1990s, then recently re-entered. One of Intel’s biggest growth areas last year was memory chips, but it has a long way to go to catch up with Samsung.

The South Korean company got its start in memory chips by licensing technology from Intel’s Japanese foes. Samsung is moving in on Intel’s traditional turf now, making higher-priced components. Its factories now churn out processors that run mobile phones and it’s the contract manufacturer for Qualcomm Inc., which is taking a run at Intel in PC and server processors.

South Korea-based Samsung took second place, with $174 billion in sales, $19 billion in profit, $217 billion in assets and a market cap of $254 billion.  Industry was the the only other company to break into the top 10 from the Asia-Pacific region( forbes report)

It is the second tech company in the world.

South Korea who was a poor country almost 35 years ago in the world and is now one of the strongest economies in the world. It is in the rank of elite nations in the OECE and the G-20 category.

The reasons are clear:

3)    Stock market size: They are ranked 10th largest in the world.

The key to their success is within the structure and anti-corruption policy and proper education at all level.  In comparison to other under developed countries they have discipline and pride which helps them move forward.

It is going to be very difficult for American companies to keep up with this unless we have changes in how we view the world and learn from their experiences.