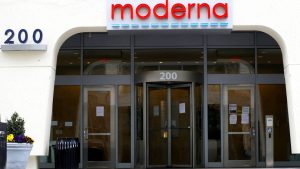 The company said a test in 8 healthy volunteers found its experimental vaccine was safe and provoked a strong immune response. It is on an accelerated timetable to begin larger human trials soon.

The first coronavirus vaccine to be tested in people appears to be safe and able to stimulate an immune response against the infection, the manufacturer, Moderna, announced on Monday, offering a glint of hope to a world desperate for ways to stop the pandemic.
Read More
How Moderna’s coronavirus vaccine news fueled a stock surge, and an uproar.

The preliminary findings, in the first eight people who each received two doses of the experimental vaccine, must now be repeated in far larger tests in hundreds and then thousands of people, to find out if the vaccine can work in the real world. Moderna’s technology, involving genetic material from the virus called mRNA, is relatively new and has yet to produce any approved vaccine.

The promising early news sent Moderna’s stock soaring by more than 25 percent on Monday afternoon and helped drive Wall Street to its best day in six weeks. Stocks were also lifted by statements from the Federal Reserve chair, Jerome H. Powell, that the central bank would continue to support the economy and markets.

Trading on Monday had all of the characteristics of a rally focused on prospects for a return to normal: The S&P 500 rose more than 3 percent; stock benchmarks in Europe were 4 percent to 6 percent higher; and oil prices also jumped. Among the best performers in the S&P 500 were travel-related companies, like United Airlines, Expedia Group and Marriott International.

With the weather warming and state after state starting to lift lockdown restrictions, Americans are eager to regain their freedom to shop, go to the beach and enjoy bars and restaurants. Still, more than 1,000 people died most days last week in the United States. Ramin Sarajari…

Vaccines are now seen as the best and perhaps only hope of stopping or even slowing a disease that has sickened nearly five million people worldwide, killed 315,000 and locked down entire countries, paralyzing their economies.

Dozens of companies and universities are rushing to create coronavirus vaccines, and human trials have already started for several manufacturers, including Pfizer and its German partner BioNTech, the Chinese company CanSino and the University of Oxford, which is working with AstraZeneca.

Experts agree that it is essential to develop multiple vaccines, because the urgent global need for billions of doses will far outstrip the production capacity of any one manufacturer. But there is widespread concern among scientists that haste could compromise safety, resulting in a vaccine that does not work or even harms patients.

The potential strength of Moderna’s mRNA approach to vaccine making is that it uses a genetic framework that can be quickly adapted for each new viral threat. The company has said that it is proceeding on an accelerated timetable, with a second phase of tests involving 600 people to begin soon, and a third phase to begin in July involving thousands of healthy people. The Food and Drug Administration gave Moderna the go-ahead this month for the second phase.

If those trials go well, some doses of a vaccine could become available for widespread use by the end of this year or early 2021, Dr. Tal Zaks, Moderna’s chief medical officer, said in an interview. “We’re doing our best to make it as many millions as possible.”

President Trump said last week that a vaccine would be available before the end of this year. His prediction was supported by Moncef Slaoui, the newly appointed leader of Operation Warp Speed, the administration’s effort to speed vaccine development. At a briefing last week, Mr. Slaoui, a former member of Moderna’s board of directors who resigned when he took up his new government post, said he had seen preliminary research data that convinced him that a vaccine could be created by the end of the year. He did not identify the data.

Also on Monday, Caitlin Oakley, a spokeswoman for the Department of Health and Human Services, confirmed that Mr. Slaoui would divest his Moderna stock options, valued at about $10 million, on Tuesday morning. Ms. Oakley added that Mr. Slaoui would donate to cancer research the increased value his shares had accrued from last Thursday until Tuesday’s sale. The share price closed at $80 on Monday, up from $64.56 last Thursday, adding $2.4 million to the value of his options.

At a round table with restaurant executives at the White House on Monday, Mr. Trump said, “This was a very big day, cure wise and vaccine wise,” and noted that the markets were lifted by drug news.

Moderna produced the vaccine in collaboration with the National Institute of Allergy and Infectious Diseases, the institute that is headed by Dr. Anthony Fauci and has been leading the clinical trials. Part of the National Institutes of Health, the agency is involved in research on other experimental coronavirus vaccines. Moderna and Johnson & Johnson have each received roughly half a billion dollars from the U.S. government, to speed development of a vaccine.

The people vaccinated in Moderna’s Phase 1 study described on Monday were healthy volunteers ages 18 to 55. Their immune systems made antibodies that were then tested in infected cells in the lab, and were able to stop the virus from replicating — the key requirement for an effective vaccine. The levels of those so-called neutralizing antibodies matched or exceeded the levels found in patients who had recovered after contracting the virus in the community.

Dr. Mark J. Mulligan, director of the N.Y.U. Langone Vaccine Center, called the Moderna findings “very encouraging.” He added, “It’s a small number of participants, but it appears to be a really good start.” Dr. Mulligan was not involved in the early testing but expected to participate in a later phase of the Moderna vaccine research.

Moderna’s early stage of testing, Phase 1, is continuing, Two more age groups — 55 to 70 and 71 and over — are now being enrolled to test the vaccine. The company did not mention plans to include children in its studies and did not respond to an inquiry about it in time for publication. But Dr. Mulligan said that tests in children were often delayed until a vaccine was shown to be safe in young adults.

The actual data from the preliminary tests has not been published or shared publicly, but has been submitted to the Food and Drug Administration, which does not comment on trials still in progress. The company said it hoped to make data publicly available this summer.

Two shots, four weeks apart, are likely to be needed, meaning that however many doses are produced, only half that number of people can be vaccinated.

Moderna said that additional tests in mice that were vaccinated and then infected found that the vaccine could prevent the virus from replicating in their lungs, and that the animals had levels of neutralizing antibodies comparable to those in the people who had received the vaccine.

The vaccine to be available to the public must go through various steps (Phase 1, 2 &3) and even if one or more vaccines show successful results after phase 3, the vaccine will still have to be approved for international distribution.

The regulatory authorities such as FDA and EMA have a big role and responsibilities to support this approval.  The big question is that if this vaccine even after approval and coming to the public can still support a new version of Covid-19 which may change its face and the vaccine will not be effective.  Ramin Sarajari