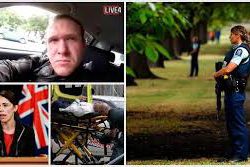 (CNN)The staggering death toll from the mass shootings at two Christchurch mosques has climbed to 50, New Zealand Police Commissioner Mike Bush said. The body of the 50th victim was discovered at the al Noor mosque, where most victims were killed, when officials were removing the victims’ bodies on Saturday, Bush told reporters on Sunday.[…]