The review in news

HONG KONG — An oil spill from an Iranian tanker that sank in the East China Sea is rapidly spreading, officials said Tuesday, alarming environmentalists about the threat to sea and bird life in the waterway.

The tanker, the Sanchi, was carrying 136,000 tons of highly flammable fuel oil when it crashed into a freighter on Jan. 6. On Sunday, the Sanchi sank after a huge blast sent up a great plume of black smoke and set the surface of the water on fire, China Central Television said.

The bodies of three crew members have been recovered, and the remaining 29 were presumed dead, the Iranian government said. Thirty Iranians and two Bangladeshis were believed to have died.

The oil slicks from the sunken tanker were growing in size, China’s State Oceanic Administration said Tuesday. There are now two huge slicks covering 52 square miles, compared with just four square miles the previous day. Strong winds were pushing the spill toward Japan, away from China, and it was now less than 200 miles from Naha, Japan.

One concern is that, since the Sanchi sank, marine life will be endangered by the fuel oil’s spreading instead of burning off. And experts are further concerned that the even dirtier bunker fuel powering the tanker will be released into the sea, exposing delicate marine life to the extremely toxic substance.

Greenpeace expressed alarm about the threat to the marine ecosystem in the East China Sea, which is one of the world’s most heavily trafficked waterways, saying the disaster occurred in “an important spawning ground” for fish.

“At this time of year the area is used as wintering ground by common edible species such as hairtail, yellow croaker, chub mackerel and blue crab,” Greenpeace said. “The area is also on the migratory pathway of many marine mammals, such as humpback whale, right whale and gray whale.”

The tanker was carrying more than one million barrels of condensate, an extremely light crude oil, to South Korea when it collided with the freighter. When spilled, the condensate can produce a deep underwater plume damaging to marine life.

The Japanese Coast Guard said the fire on the surface of the sea was extinguished early Monday.

“Given the poor condition of the ship after a week of fire and explosions, it is likely that all cargo (and fuel) tanks are breached, and all of this toxic hydrocarbon mixture has now been released into the environment,” said Rick Steiner, a marine conservation specialist formerly with the University of Alaska.

East China Sea oil tanker disaster: what it means for the environment

What was Sanchi transporting?
The oil tanker was carrying condensate oil, which differs considerably from the thick black oil slicks typically associated with a spill. Instead, the colourless oil is a liquid only under certain conditions and is partially soluble in water, making it much harder to separate and detect.
How much oil leaked?
Currently, it is impossible to gauge exactly how much condensate ended up in the water. Some of it burned off and some probably evaporated, but any oil still onboard when the ship sank will slowly leak out over time and be difficult to contain.

What will the impact be on the local environment?
The condensate that leaked into the water could potentially wreak havoc on local fish spawning grounds and the Sanchi sank in the migratory path of the humpback whale, according to Greenpeace.

While there will not be black beaches covered in oil, condensate is toxic when inhaled and on the skin and is described as “toxic to aquatic life with long lasting effects”.
Another concern is the fuel that was powering the Sanchi. The day after it sank, China’s State Oceanic Administration reported two oil slicks, one nearly 15km long and another about 18km long, although it is unclear if these are from the cargo or the fuel tanks.

“It is possible that we will see chronic low volume leakage over a period of time at the seabed. … Impact would remain relatively local.”

What could China have done differently?
There were two competing goals in dealing with the tanker: putting out the fire in an effort to rescue the crew, or allowing as much oil as possible to burn off to limit polluting the waters. In the end, there was a mixture of both.

The National Iranian Tanker Company, the firm that operated the ship, had two ships nearby and a spokesman for the company wondered why Chinese fire fighting boats were using water to douse the flames when foam would be more effective.

While the blaze was still burning the Iranian Merchant Mariners Syndicate, an industry group, voiced frustration at the lack of progress in putting out the fire, and said it was “clear that the Chinese are not cooperating enough”.

Other criticised Chinese efforts to subdue the fire, and suggested a plan that would have assumed the entire crew had no hope of rescue.

Yu Zhirong, a former deputy of the East China Sea unit of China Marine Surveillance, told business magazine Caixin the Sanchi should have been bombed or torpedoed, causing an explosion that would burn up the remaining oil and limit the amount the seeped into the ocean.

Allowing the ship to sink was described as the “worst-case scenario”.

What happens now?
China has announced it will conduct an investigation into the incident, although there is no sense when a report will emerge and how detailed it will be. Greenpeace has called on China to assess how much oil spilled into the ocean and take “appropriate containment and clean up measures”.

An Iranian tanker carrying 150 million L of oil partially exploded and has been on fire in the East China Sea since Jan. 6, following a collision with a cargo ship about 160 nautical miles (300 km) east of Shanghai.
Thirty-two crew members were aboard the vessel. One body has been recovered, and the fate of the remaining crew is unknown.
Beyond the immediate concern about the crew, “We are worried about the potential environmental impact that could be caused by leakage from the vessel,” says Rashid Kang, campaigner at Greenpeace East Asia. No large-scale oil spill had been reported by C&EN’s deadline.
The tanker, a Panama-flagged vessel owned and operated by National Iranian Tanker, was ferrying highly flammable condensate, a type of ultralight crude oil, to South Korea’s Hanwha Total Petrochemical.
By comparison, the Exxon Valdez was carrying 200 million L of crude oil when it spilled 41 million L into Prince William Sound off Alaska in 1989, contaminating 2,000 km of coastline.
If the ship sinks, the oil “will seep slowly into the ocean, providing a chronic pollution source for some considerable time.”
—Simon Boxall, National Oceanography Centre Southampton
The term condensate describes a range of light crude oils that occur primarily as a by-product of natural gas production. They are usually composed of propane, butane, and pentane and also have high concentrations of benzene and hydrogen sulfide.
Petrochemical companies use condensate as a feedstock to manufacture various plastics. Refineries use condensate to produce vehicle fuels, such as gasoline and diesel.
China’s transport ministry said Jan. 9 that the condensate was burning off or evaporating, reducing the chances of an environmentally destructive oil slick forming off China’s coast, according to the state-run People’s Daily newspaper.
Condensate does tend to evaporate quickly, confirms Simon Boxall, a principal teaching fellow at the National Oceanography Centre Southampton at the University of Southampton. “This is fine while the winds remain westerly and blow the contaminated atmosphere and waterborne plumes away from the coast. But the story could change quickly if the winds change,” Boxall says.
And condensate is even more combustible than heavier crude, raising concerns that the tanker could break up and sink unless the fire is brought under control.
If the ship were to sink, the highly toxic condensate “will seep slowly into the ocean, providing a chronic pollution source for some considerable time, and will seriously damage the immediate environment,” Boxall tells C&EN. 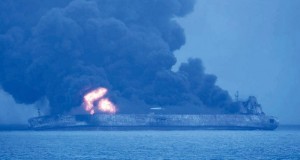 In addition, he says plankton and fish will accumulate the waterborne toxins and spread beyond the immediate vicinity, creating the need for a fishing ban in the region and regular monitoring to ensure the contaminated area is sufficiently defined.
The best option for the environment, Boxall says, is to extinguish the fire, secure the vessel, and tow it to safe harbor so the oil can be removed. “Plan B would be to flame off the oil at the surface. That’s fine as long as this doesn’t cause an explosion and the ship then sinks,” Boxall says.
Spills of condensate have been very rare, so there isn’t much data or protocol for dealing with them. “The material is more soluble in seawater than the heavier crude. This means that the surface slick mixes with the seawater better than heavier crude and is more difficult to separate,” Boxall explains. “We don’t really have an effective way of removing light crude from the ocean.”